The wand was a method of training Archers to shoot in a straight line, it goes back 8-900years, when you had to train with archery equipment by law, from the age of 6 years, the wand would have been put out at close range to start with and as you improved, the distance would have been increased out to 220 yards about 200 meters, known in some circles as a battle or artillery shot.
By the time you were 15 years old you were expected to hit the (mark) or wand at 220 yards with a standard arrow (54 grams in weight) to achieve this distance with this arrow your bow weight would have been in the 120 pounds plus, (55kgs.)

Using this information Archers of the Tees created the Wand competition around it, making it available equally between Ladies, Juniors and Gentlemen, and it has proved to be the most difficult (psychological) competition on the Archery calendar.

What a beautiful day, after the rain we have had, the build up for the shoot as far as the weather was concerned was not looking promising at all, but as usual when Archers of the Tees organise an event their guardian angel steps in with the weather.

This year the shoot organisation and the shoot itself was more relaxed, last year as it was the first one, was a bit more formal.

Archers of the tees got the ground set up in almost military fashion and booking in started on the dot of 10a.m. 57 competitors from all over the British Isles booked in, including Alexander from Holland, Fede from Spain, the shoot was an open shoot, this means all age groups shooting against each other for the same prizes, no differentiating between sex or age, if you think you can do it, GO FOR IT, enter it.

After the opening speeches and our thanks to LORD BARNARD for letting us shoot in his home and grounds, sherry and biscuits and (lemonade) were taken while the archers looked each other up and down checking out the competition, but there was a surprise Waiting for them.

The shoot got under way with the warm up competition, no hiccups and the weather was great and getting warmer. There were a lot of spectators, and lots of questions being asked and being answered by the Archers nearest to the boundary lines, the shoot requires that we try and shoot as many arrows out of six dozen as possible from the start of the shoot until lunch, we managed a very frustrating 51 arrows in sets of three, in 17 ends, then we stopped for lunch.

As per usual the catering was the best, and again the comments came in immediately about how good the food was and how professional the staff were, it really helps make the day, and they forgot how badly they shot in the morning, then back to the main event full of good cheer.

We started the afternoon with a shoot off for first and second place, in the warm up round, Stan Rylance shot against Tom Higgins for first place and won, Tom Higgins second and FedeValls third for the morning shoot, they receive the gold, silver and bronze medals for the warm up competition.

The top Gentleman Stan Rylance, the top Lady Julie Plunkett and the top Junior Justin Little all received a hand made set of arrows by JJ TRADITIONAL ARCHERY the sponsors of the competition.

The main event for a silver gilt medal struck at the Royal Mint in Wales and a silver wand trophy made by fellow archer and jeweller Paul Sampson plus a hand made set of arrows made by JJ Traditional Archery, was shot for in a knock out situation, using four distances, 20, 30, 40, 50 yds.
To qualify each archer had to hit the target at least once out of 3 arrows at 20yds., to move up to the next distance of 30yds., and the same again to go up to 40yds., and again up to 50yds., on the way if you fail to hit at any particular distance you’re out and you walk off the shooting line.

29 archers went on to 30yds., 13 archers went on to 40yds., and 5 archers were left in the shoot out at 50yds., at this distance it was the best or most hits you could achieve out of 3 shots, if there was a tie situation, the archers would carry on until there was one archer left. This did not arise, when all the archers had shot their 3 arrows, only one archer had achieved a hit, and this was a junior archer of 15 years of age.
As we walked forward to check the score he was well embarrassed by the amount of cheering and applause he recieved and the hand shakes and respect he received from senior archers I think took him by surprise.

Who is he, he was born Alexander Loxley (does the Earl of Loxley ring a bell) now Alexander Chisholm-Loxley, his mother phoned last week just before the shoot and although all the entries were accepted 2 weeks previously, asked if Alexander could take part, I told her it would be okay as we try to promote juniors as much as possible, but he was a modern recurve archer and did not own a longbow, so I said if he could borrow one and the arrows he could take part, so there you have it, a young man of 15 years, books in late, borrows the bow and arrows, has the same name as robin hood, shoots well in the morning, and walks off with the main prize in the afternoon, now that is the spirit of this competition, if you think you can do it, GO FOR IT.

So now Alexander has won the medal, the trophy and a hand made set of arrows he only needs to borrow a bow next year. 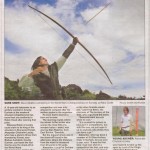 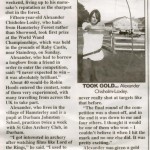 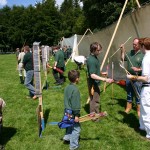 Collecting arrows in the warm up round. 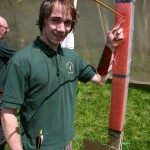 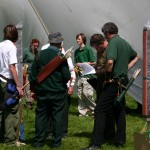 Scoring. Very straightforward and quick in this competition. 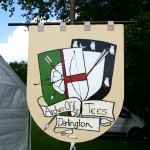 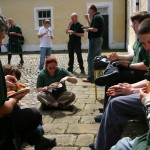 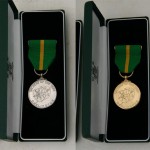 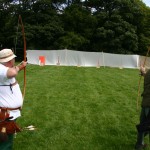 Stan and Tom shooting off for first and second place in the warm-up round. 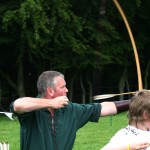 Iain shooting at the stick wand. 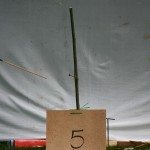 Someone has managed to hit it. 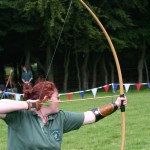 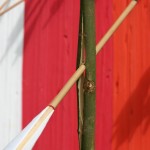 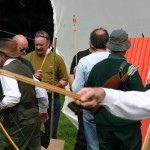 Collect you arrows and prepare for the main event. 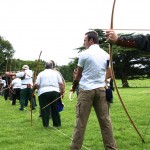 Shooting at the first distance. 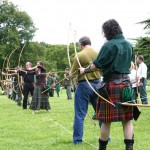 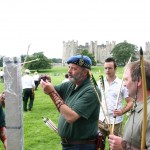 Collect your arrows. One or more hits to stay in. 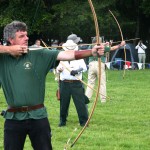 Plenty of room on the shooting line now. 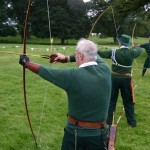 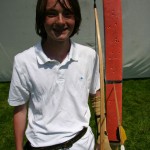 Alex with his competition winning arrow. The only arrow to hit from 50 yards. 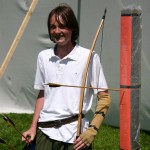 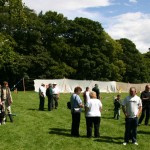 Time for a bit of a chat before the prize giving. 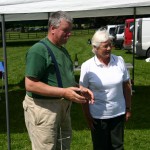 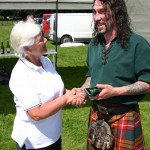 Fede Valls receiving his bronze medal for third place in the warm-up competition. 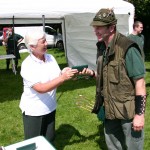 Tom Higgins receiving his silver medal for coming second in the warm-up competition. 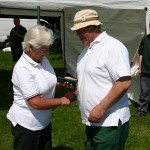 Stan Rylance receiving his gold medal for coming first in the warm-up competition. 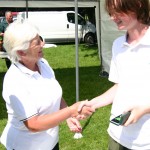 Alexander Chisholm-Loxley receiving his medal for winning the Wand Championship. 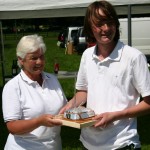 Alex being presented with the Wand Championship trophy. 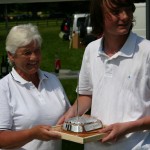 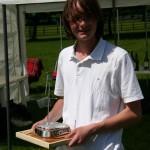