HISTORY OF THE WAND

HOW TO SHOOT THE WAND WORLD CHAMPIONSHIP

HISTORY OF THE WAND

The wand was a way of training Archers to shoot in a straight line.

Because the wand is standing upright, you then encourage your archers to keep the bow and arrow upright and parallel with the wand.

These wands were staves of wood or branches which were straight and usually cut from willow or hazel and would have probably been about 1-1 1/2 inches thick.

Archery training was the Law of the land at the time because we had to be ready with trained men to go to war or protect our country from invasion.

You started Archery at seven years of age and were expected to hit the Mark with the use of a War Bow at 220 yards, by the time you were 15 years of age.

To achieve this you set up the wand at a short distance first, as your Archers got the hang of hitting it regularly, you then moved the wand outor increased the distance, usually by ten yards at a time until your archers by age and skill could hit the wand or mark at 220 yards or (Artillery shot) battle shot. The ancient word for Archery is “Artillerie”.

So to this end Archers of the Tees decided to create a competition around this knowledge, and the distances used in our competition are within modern training methods, beginners distances and Gents Ladies and Junior competition distances, so as everyone can take part at what ever level of Archery they may be at.

HOW TO SHOOT THE WAND WORLD CHAMPIONSHIP

The shoot is a one-way shoot with three arrow ends ( distances ).

This means you shoot three arrows at the first distance, then walk forward and score your arrows and collect them.

You then walk back to the next distance to shoot again.

You then go through the same routine again, over all the distances until the end of the shoot.

The shoot is split into two competitions, the Warm Up Shoot in the morning, highest score wins.

Then a break for Lunch.

THE WARM – UP ROUND

The Warm Up Round is quite simply, the most Hits Wins.

If there are ties in the scores, there will be a shoot off to decide the winners

LUNCH IS PROVIDED BY THE CATERING STAFF AT RABY CASTLE.

During the lunch break if there is time, challenges and demonstrations are put up by some Archers for a bit of fun etc., :- JAPANESE SWORDSMANSHIP,,,, KYUDO OR JAPANESE ARCHERY have been put up in the past. If you can think of something to do feel free to give it a go.

THE KNOCK-OUT OR HEAD-TO-HEAD

Each Archer will shoot three arrows an end, starting at 20 yards, needing only one hit to go forward to the next distance, of 30 yards, and the same at this distance to go forward to 40 and then to 50 yards.

If at anytime during the shoot off up to 50 yards there is only one Archer moving up to the next distance then they shall be declared the winner of the head to head. ( wand world champion )

RUNNING THE HEAD –TO – HEAD

EACH ARCHER WILL SHOOT THREE ARROWS AT 20yds.
ONLY ONE HIT IS REQUIRED, TO GO TO THE NEXT DISTANCE.

EACH ARCHER WILL SHOOT THREE ARROWS AT 30yds.
ONLY ONE HIT IS REQUIRED, TO GO TO THE NEXT DISTANCE.

EACH ARCHER WILL SHOOT THREE ARROWS AT 40yds.
ONLY ONE HIT IS REQUIRED, TO GO TO THE NEXT DISTANCE.

IF AT THIS DISTANCE OF 40 yds THE MEDAL HAS NOT BEEN WON,

SCORING WILL BE MOST HITS WINS, UNTIL THERE IS ONLY ONE ARCHER LEFT STANDING ON THE SHOOTING LINE.

AND CARRY ON UNTIL THERE IS A WINNER

REMEMBER SAFETY IS THE AIM, AND THERE IS NOBODY TO BLAME? 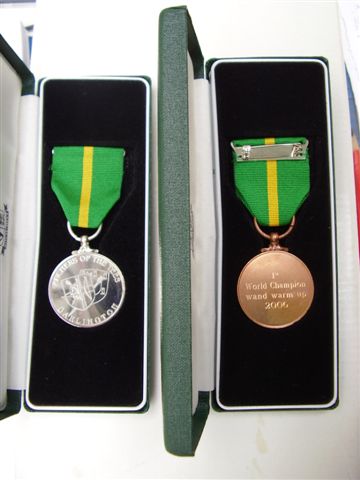